Hey guys, I am coach Rebecca Smith and my job is to help young athletes build lasting confidence, overcome mental blocks, and learn to trust themselves again. Today I’m talking about how to bounce back after a bad day on a scary skill.

And it is the most frustrating, most awful thing that can happen to a gymnast. I also see these happening in pole vaulters and figure skaters. A lot of the times you encounter mental blocks in those “scary sports.” I’ve also seen them in tennis. Anytime when you’re in your own head, there’s fear of failure or fear of injury, and sometimes your brain will just put on the brakes.

I got a question this week in the PerformHappy community, which if you haven’t heard of is my online mental training membership.

One of our girls in the PerformHappy membership community had a bad week and posted about it.

She said “Today I had a really bad day at practice. I was doing my flyaway that I competed at the meet. And it was really scary.”

So she was doing her dismount off the bars for those of you non-gymnasts. And she did it but it freaked her out. It felt really scary then. So then she’s back in practice the week after. And she says “Everyone was expecting that since I competed it, I would be fine. But all I can think about is that terrified feeling. All of my lower progressions are terrifying too. And I haven’t gone for those. I don’t know what to do.”

Here’s the confusing thing. Sometimes skills work under pressure in a competition scenario. And then you get back into practice and the desire to perform the skill is lower because you’re not at a meet and you don’t have judges staring at you. So your desire is lower and your fear is able to overpower it. That’s one piece of it.

Here’s how I responded to her as far as being able to bounce back after her fall and what I would suggest to you:

If you have been in this situation – if you try your skill in practice and it doesn’t work and you’re not able to do it on the regular bar and for some reason you’re not doing it on the pit bar and all of your progressions feel like there’s nothing I can do, that means your brain is sending you a message.

This is not something to freak out about. I know you’re all like, huh? How could you not freak out? If all of a sudden you just physically can’t do a skill that you should be able to do.

You don’t freak out because freaking out only makes it worse.

You want to think about fear as feedback to you can find a way to bounce back.

So when you’re having fear, you are getting some feedback from your brain that is trying to tell you something. It’s trying to warn you about a risk. It’s like, “Hey, look out over there. There’s a tiger. Whoa. Remember when that felt scary, don’t do it.”

That’s what your brain is there for. Your brain is supposed to be constantly telling you, don’t do this. And so that’s what it’s doing. This is a very helpful message that can help you to actually be more confident.

If you learn to tune into the voice, instead of shoving the voice down, you can gain lasting confidence and learn how to bounce back. Many athletes do what I call a ‘I’ll just chuck and pray.’  It’s a ‘I hope I don’t die but I better not let my coach down’ kind of thing.

And then it’s not working and it’s not working. Eventually that little voice has to become louder. And it has to put on the brakes for you because you are so good at not listening to your fear.

Especially the athletes who are in higher levels. Those higher level athletes have gotten usually pretty good at not listening to their fear. So if you want to be the kind of athlete who has lasting confidence and can deal with scary skills, you have to start listening to this voice.

But when you’re listening to it, you don’t go ‘Oh no, I can never do it again.’ Instead, you have to be like ‘I will get through this. My brain is sending me a message. I believe in myself, I’ve gotten through this before. My brain is wired to put on the breaks here. Let’s figure out what I need to do.’

Instead, a lot of people go into this wondering “why?”

But why is judgmental. ‘Why am I not going? Why can’t I just do this? What’s wrong with me?’

Instead you want to go, ‘Well, what can I do? What is the solution? What is something in this moment that I can do now?’

So if you’re in that situation, don’t worry. I’m going to tell you what to do in order to bounce back.

#1: First you have to look at this mental block as feedback

This is helpful information that I need to listen to in order to bounce back. There’s nothing wrong with me. My brain is just sending me a message.

I want you to immediately ask for help. That is the very best thing you can possibly do in those moments.

If you’re ashamed of your fear and don’t want anyone to know about it, then you’re in it alone. It gets even more shameful. Your confidence drops. So the second that you have that “Ooh, that was spooky” feeling,  open your mouth and say something.

Your coach can’t help you if we don’t know what’s going on. So open your mouth. There’s nothing wrong with you. Ask for help then.

So a lot of the time we’ll take those expectations and be like, well that’s more important than how I’m actually feeling when that’s not true at all. The way that you’re feeling, the way that your brain is sending you messages, that’s going to trump anything else.

Your brain always wins. Competition season doesn’t win. You know what the coach wants you to do…doesn’t win. The thing that is in charge of you is your brain. It’s like the little driver in the driver’s seat up there. And if your brain is not on board, you’re not going. So anytime that you feel like you’re being driven by expectations like ‘I should be able to do this’ that’s something that I will encourage you to write down on a piece of paper. And then chuck it and just let it go.

Sometimes I need to actually physically write out: My parents expect this. I expect this. This should be like this.

You just get all that nasty stuff out of your head. That’s not useful. Crumble it up and toss it. And then you might be like, “Well but I’m supposed to have drive and work towards something.” Yes you are! But you also need to get into the moment when this stuff is happening, because all that future is just not going to be helpful.

So here’s what I recommend in those moments where you just had a spooky fall or some big confidence buster.

#3: Have A Bounce Back Routine

The first thing to do will be your bounce back routine. There’s four steps to it. This is how you get your brain to start moving forward again. And this doesn’t even have to be that big of a fall. It could be any mistake that you make you can apply this bounce back tool to.

So the first thing you do, you had something happen and you feel bad. Feel your feelings. I know not all of us have the luxury of crying at practice, but to some extent you have to acknowledge that those feelings are there.  Because when you’re trying to not be afraid or not cry then what happens is that it all comes flying out anyway, in a really inopportune time.

I learned this from Tiger Woods. He used to get really angry when he would miss a hole. He’s a golfer for those of you who don’t know who that is. He would get really frustrated to the point where he would throw clubs when he was younger. So he came up with this method where he would take his club after a bad shot and he would stomp to his golf bag and he’d be like “I need to stop 10 stomps, like, boom, boom, boom, boom.” And then he would let go of his club and he would let go of that hole. And he would have a fresh start.

So then there you are with a clean slate and you’re starting fresh. That moment of exhale when you’re like, okay, here I am.

You got to do something that you can be successful at. So my friend, the gymnast, who said, I don’t know what to do. The thing to do in those moments is anything you can do that will be successful because in those moments you’re feeling like I am a failure or I’m a loser. I am too scared or I’m broken. Like all of that negative self-talk is just flying. Then you’d take a drink of water back in the moment when you’re like, “What can I do? What can I do right now that I can do successfully?” And it might be that you’re going to get up on the bar and swing three times and tell myself when the flip would happen. If that’s all you’ve got, then that’s what you’ve got and you get up there and you do it successfully. 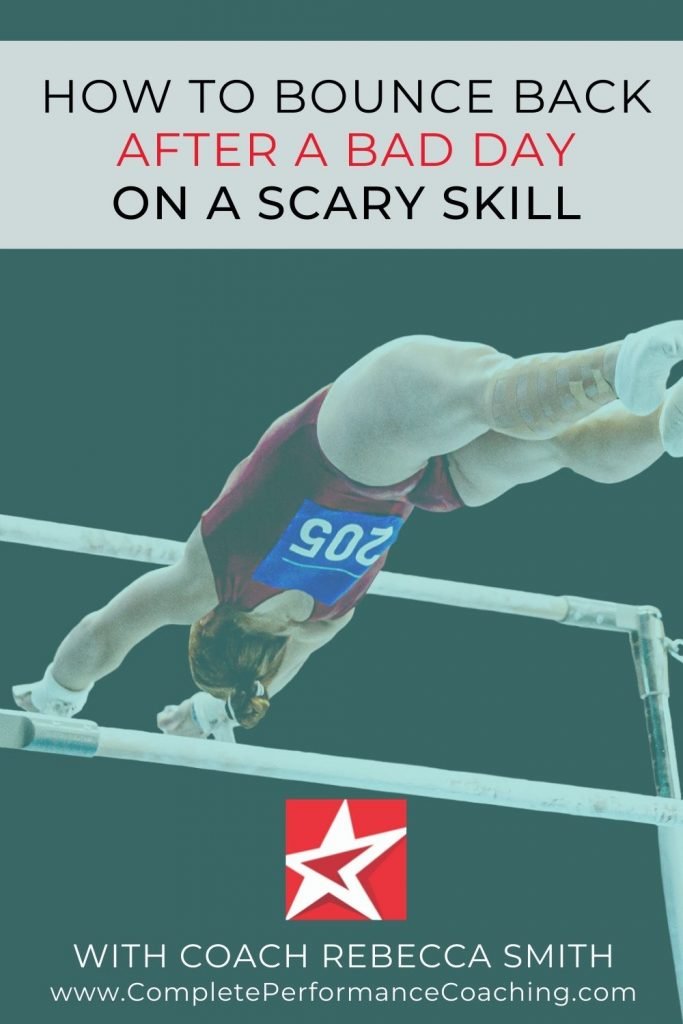 We have a whole challenge on this in PerformHappy that’s called The Confidence Jumpstart. For any of you members who are already members get back in and do that one again. It’s a six day challenge with little bite sized pieces. Get in and do it again because it will remind you how to listen to your brain. It will remind you exactly what your brain is telling you. It will remind you what that sweet spot is for exactly the progression that you need to go to that’s not too hard and not too easy that’s going to feel like a win. It’s always there for you as a member, to be able to go back to that first challenge and get the ball rolling again.

So anyone else who wants some more confidence building tips, especially anyone who deals with mental blocks or these sort of like big dips in confidence from time to time that are not based on your talent, your ability, it’s just that you get stuck in your head, check out our free training on developing a champion mindset.

This is a 60 minute training where I go through the whole five pillars of a champion mindset. So grab a slot, sit down, athlete and parent together and check it out. So many good nuggets and different exercises, that will help you to think like a champion so that you can be a champion. Register for that today at completeperformancecoaching.com/champion.

Also, you can schedule a consult call with me here: completeperformance.as.me/consult 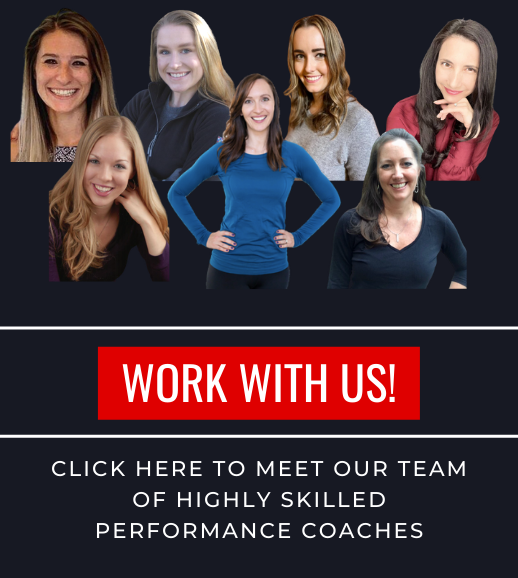