Today’s Topic: Dialing in Your Focus for Important Competitions

Today I’m going to take a question from one of the members of the PerformHappy community.  She is a fabulous, level eight gymnast who I adore.

She checks in every week, something that I have all the members do early in the week, and post goals to let me know what they’re up to.  That’s what she was doing here, but she also had a question because she has a big competition coming up.

Q:  “In two weeks I have states.  States is really important because I want to make it to regionals.   just have to think of it like a normal meet.  My goals for this meet are to just get all my nerves out, be confident, and trust my body with all my skills. I’m going to work really hard mentally to make sure that happens.

Then she put down some really awesome concrete goals.  Because we’ve been working together for a little while, she knows exactly what she’s going to hit this week in practice.  She goes on to say,

“At my meet on Sunday, I split the beam in warmups.  I was even more nervous, then my teammate went before me and she did not do her switch leap and missed her connection, so she added a connection later in her routine and it was very messy.  I got that in my mind, then in my routine, I did the same thing and I got freaked out.  Do you have any advice because I know I should not watch the routines but I couldn’t help it.  My coach knows what is going on and I will not be watching routines at states.  I’m trying to use positive words throughout my routine and talk myself through it, but then there is a break between the skills and my mind and I go to the place I shouldn’t.  Help!  Can I have a plan for the next two weeks?  I really want to rock my states.

This is a great question.  I responded to her in the forums, but because it’s such a good question, I actually ended up talking with a couple of girls this week who have states coming up with these same exact suggestions. So I was thought I’d bring it to the masses.

Here’s what I recommend.  It’s something called mental choreography, and it’s exactly what it sounds like.  You have your body choreographed to do a figure skating program, or a trampoline pass, or a gymnastics routine, or even a race if you’re a swimmer.  Most closed sports have some sort of like a routine.

So you have that choreographed.  You know exactly what you’re supposed to be doing, but your mind has these little breaks in between skills or in between certain things where it could go sideways.  This is why choreographing your mind is something I strongly encourage.  Any closed sport athletes, meaning you do certain things in a certain sequence, get your mind ready to do certain things in a certain sequence as well.  This can apply to more open sports like team sports, soccer, it even applies to pitching and baseball, something that you’re always going to do the same way.

9 Steps for Dialing in Your Focus

Today, I’m going to give you my nine-step process. Here it is…

Step 1: Choose a skill or sequence of skills to choreograph

Maybe it’s your beam routine, a bar routine, or it’s your 50-yard free.  Whatever it is, when you’re just starting out, pick a skill, section, or sequence of skills that you’re going to choreograph.  You don’t want this to be a six-minute program.  Start small.  Start with something that you can really put to work.  Maybe bigger than a vault, but bars or beam routines are perfect for this.

Step 2: Write it out

Then, in the other column, you’re going to write down what you would like to be focusing on during that skill.  This isn’t, “I hope I don’t fall,” or, “Oh my gosh, I’ve been doing really well. Don’t mess this up.”  Those are the sort of things that are going to pop into your head if you don’t plan for it.  Instead of, “Oh my gosh, my series is coming, I hope I don’t get nervous,” you’re going to go, “Step, jump, lift, push, kick, Chin, hand, hand, one, two, three, four,” etc.

Those are the things you’re going to write in the right column once you’ve written down all your skills on the left.  You’re going to write down whatever the correction is.  It can be counting, singing, anything neutral, as long as it’s consistent and it’s something that’s going to help you do your job.

Once you’ve written that all down, that’s step three.  Step one, pick a skill.  Then, step two is write it out. Step three, find your focus and write down exactly what you’d like to be focusing on.  Then step four, you’re going to visualize with your focus words.  Now, when I’m helping somebody come up with their mental choreography (I’m usually on facetime with them) and I’ll say, “Find some space.  Stand up.  Take your sheet with what you’re going to think about and do that.  Get up and do your beam routine, holding your paper, looking at your words, going through it, and start to practice and say everything out loud.”  So she actually gets up and goes, “Chin, one, two, three, four, lift, kick point,” etc., while actually physically walking through it.

Don’t do it anywhere where you’re not going to be safe.  After you have done that a couple of times, get your little voice recorder out.  If you have an iPhone or any kind of voice recording app, record yourself saying those words as you go through.  Then notice if you have any gaps.  If there’s any point where you’re doing a skill and then you’re silent while you’re dancing or silent through something, you need to put something there, even if it’s Duh Duh, Duh Duh, Duh Duh, Duh Duh, or literally just counting.  It needs something because those are those gaps that this gymnast was talking about where your mind can go sideways, where your mind goes into the past or into the future and it takes your attention off of what you need to do to get the outcome that you want.

Make sure that there is no break in the rhythm.  There are collegiate gymnasts who just count.  They start at the beginning and they count all the way to the end and they dismount on number 84.  That’s totally fine, but you want it to be something that’s going to work for you.

So you wrote it all down, you’ve danced around your bedroom saying things out loud, and now you’ve audio recorded it.  Next, you’re going to play it back.  Everyone hates the way their voice sounds.  Don’t worry.  It’s fine.  You’ll get over it.  Listen to yourself, talking yourself through your mental choreography for your routine.  It’ll sound awkward, but once you get past that, you’ll hear yourself kind of instructing what you should be focusing on while you visualize your routine.

So you stop and close your eyes, you hit play, you listen, and notice if it’s right.  Once you’re imagining the full skills in your mind, you’ll know, did you go too fast?  Did you skip your dance? Do you have a gap?  Did you stumble on yourself?  Then you’re going to record it again.

Listen to it again.  Did I get it right?  Sometimes it takes three, four, or five times to get it right, but do it right.  Once you have that, that is going to be the soundtrack to your visualization, and that is step five.

Make sure that the time is right, it feels great, it feels confident, and there are no gaps.  Everything is completely full of good, useful, focusing cues.

You are going to visualize along with this recording, and make sure to use your focus words every time you do that skill from now on!  That will tighten up your focus and make your skills more consistent. 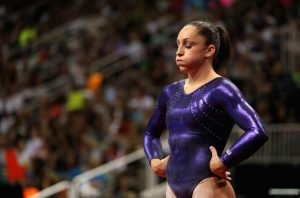 You want to give yourself a reminder before you go to bed each night.  If you have two weeks, I would recommend visualizing at least once during the day, maybe in the car on the way to practice.  If you’re not driving, then before bed.  You’re doing it every single day so that what you’re doing is you’re reminding your brain what it’s supposed to be focusing on.

This way, when you’re in practice and you do the routines, you do them with those thoughts in mind when you might not get it exactly perfect while you’re learning that you’ve got two weeks, that’s enough time to store this in your memory.  You don’t want to do this if you are competing tomorrow.  If you have a couple of weeks, start doing this every morning, every night, or in the middle of the day on the way to practice so that you can repeat it, repeat it, repeat it, repeat it.  Commit it to memory and then you’ll be ready to rock when it comes time for competition.

Here’s what’s going to happen.  You’re going to have a thought that pops in that’s like, “Oh no, my teammate fell!”  Then you’re going to go, “…and three, four, five, six, seven chin,” and you’re going to know exactly where to pick up, where you left off, so that you’re not stuck in the “what if” or “oh no”.  All of those typical thoughts that might sabotage you, mid-competition, they’ll start. That’s normal, but then you can knock them right out with exactly what you’re supposed to be refocusing on.

If you want to join us and be a member and get in on this awesomeness that we have going on in the PerformHappy community, you can check it out at PerformHappy.com where we post goals and have live trainings every week.  I’m getting ready to add even more live trainings so I can get in with the athletes and guide you through what you’re going through.

We actually just added a really cool thing where we’re doing hot seats every week.  Pretty much every week someone will volunteer.  I actually coached them live in a group setting for 30 minutes and all of the other athletes can chime in, then give suggestions.  “Here’s what I would do”, “I’ve been in that situation too” or I’ll go, “Raise your hand if you can relate,” and all the hands will raise because we’re all in this together.

We’d love for you guys to check out the community, PerformHappy.com and you can always find me on Instagram or Facebook or the podcast.  I’m everywhere. 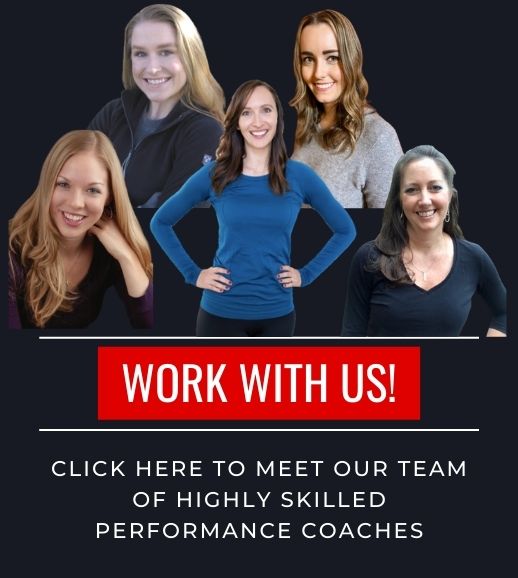