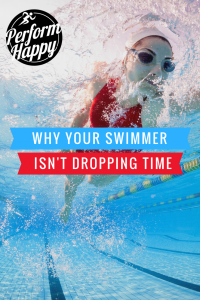 You show up at every practice.  You bust your butt.  You care more than a lot of the other swimmers in the pool.  You’re used to working harder than everyone.

It used to pay off, but it’s been months, maybe even years since you’ve looked up at the clock and felt happy.

Will I ever get faster?

It’s especially hard when you had a ton of success early on in your swimming career.  Now college is getting closer and closer, and what do you have to show for all those early morning practices and missed social events?

Here are the top 8 reasons why you’re not dropping time:

I call this “I knew this would happen” syndrome.

You failed last time.  You failed the time before.  So you keep your expectations low.  It’s hard to keep getting let down over and over.  So you start to expect the worst.  At least that way you won’t be let down, right?

Here’s the problem with that…

yes, it makes it so that failure isn’t so crushing, but it also takes success off the table.

Your body does what your brain wants it to do.  If your brain is saying “this isn’t going to go well,” your body will answer with, “okay!”  And then you don’t perform to your potential.

I worked with a swimmer who was used to being the one who didn’t qualify.  Of her high-level swim team, she was the only one who never got to get on a plane her freshman year.

We identified this voice in her head that we affectionately called, “Eeyore.”  This voice would say things that zapped her strength, killed her motivation, and kept her expectations low.

Once she became aware of this voice we replaced it with her confident alter-ego.  This voice had to work overtime to drown out Eeyore, but with practice, it started to be her go-to.  She started to kick harder, she started to have more fun in practice, and in a couple of months she was on the plane to Seattle for the big travel meet.

Have you ever had the experience of being completely in the moment while you’re swimming?  Everything is going perfect?  Maybe it was during a really hard set.  For some reason, it just started to feel really good as you stepped up to make a new interval or beat that kid next to you.

If you know what I’m talking about, then you’ve experienced flow.  It’s why we all do it.  That experience that makes all the swimming worth it.  It feels incredible.

Here’s the problem, and probably why you’re not having more flow at meets… it only happens in the moment.  Right now.

If you’re focused on a time, you’re in the future.

Don’t get me wrong, times can be very motivating.  They get you to work hard at practice, but times have no place at the meet.  I always joke that if we could just do away with the clock everyone would swim so much faster.  The main reason is that the clock takes people out of the moment.  If you’re focused on exactly what you need to do (moment-to-moment, stroke-by-stroke), you’re much more likely to get the time.  I promise.  I’ve seen this happen over and over.

I’ve had the pleasure of working with some incredible coaches and incredible swim teams.  These coaches have sent many kids to D1 colleges, Olympic Trials and even to the Olympics.

Even the very best coaches make mistakes some times.  This isn’t because they don’t care.  The main reason coaches mess kids up is because they assume the same things will motivate everyone.

For example, let’s say a coach had a lot of success in his personal swimming career with the strategy of, “just go out there and beat the guy next to you.”  He was super competitive, this got his juices flowing, and helped him to kick into overdrive and win.

Here’s the problem… From my experience, this only works for maybe 25% of athletes.  The other 75% just get stressed out, lose focus on what they need to DO to beat the other guy, they go out there, thrash, get exhausted, and add seconds to their time.

Then you wonder why it works for other people, but not for you.

Here’s why: everyone is different.

This is something I help kids identify.  You can also figure it out as you go.  When do you swim well?  What was your mindset going into it?

If what your coach says to you at a meet isn’t helpful, I’m giving you permission to get to know yourself and try something different.

This is a big one.  I’ve seen so many kids go out to do an event they aren’t very good at, and they’re pleasantly surprised by the results.  Then they go to do “their” event, and they blow it.

It’s all about the pressure you’re putting on yourself.  If you “have to” do well, it creates tension.  It pulls you out of the present and makes you think about the “what ifs.”  What if I don’t drop time?  What if I don’t get into college?  What if I never get any faster?  In events you don’t care about, however, you’re free to just go out there and swim.

I’m not saying you shouldn’t care.  All I’m saying is that you’re better off coming up with a mental strategy that allows you to be the same swimmer in every event, at every meet – no matter how “important” it is.

Have you ever seen those swimmers at the big meets who do all the mental “stuff” to get in the zone?  They’re making their Michael Phelps face, listening to music, staring into the pool, putting their parka on one arm at a time, in exactly the same way they did at that one meet where they got a best time.  You can’t talk to them because it will mess up their vibe.  If they forget their ipod, they freak out.  They think that if they don’t do all the “stuff” they wont swim well.

I love a good pre-race mental strategy.  It’s a huge part of what I teach clients.  But there’s a right and wrong way to do it.

The key isn’t doing lots of “stuff.”  It’s determining what actually works and being consistent with it.  Those people who go into crazy mode at big meets with lots of new “stuff” are usually telling their bodies, “okay, I’m doing all the stuff, that means it’s time to get really nervous because this is a big meet.”

Once you figure out your ideal mindset, and how to get there, do it before every practice.  Before every small meet.  And then you’re ready to do it at the big meet.  You’re telling your body: “it’s just another day of swimming.”  Which allows you to swim just as well at meets as you do in practice.

(If you want some help coming up with an effective pre-race strategy, you can download my free planner at the bottom of this post.)

When the brain senses a threat, it sends you into fight-or-flight mode.

Whether it’s a 4-alarm fire, or just burnt toast, your brain doesn’t know the difference.  If you’re getting ready to race, going up a rollercoaster, or being chased by a tiger, your brain responds in the same way.  It sends messages to your body to tense up, to make your heart pound, to send all the blood from your arms and legs into your core.  It makes you want to throw up or pee your pants.  It makes you want to get the heck out of there.

Believe it or not, this is normal.  Even the best of the best get butterflies, their heart starts to pound, their focus narrows in.  What’s the difference between those who thrive under pressure and those who fall apart?  2 things:

If you know what to do when you start to feel nervous, you can say, “bring it on.”

If you have a bad first event, does that usually mean you’re going to have a bad meet?

If your answer is yes, then that’s one reason why you have bad meets.  Not the fact that you had a bad first event, but because you believed it would affect the rest of your meet.

Confidence is often built on past experiences.  If you have a bad taper, or a bad couple of practices before the meet, you might assume you’ll have a bad meet.  Whether you realize it or not, you are actually sending yourself a message that says, “hey body, let’s have a bad meet, okay?”  and your body says, “okay, sounds good!”

Have you ever had a bad first event and then a good event after?

Have you ever had two or three bad events and then a good event?  Dig deep.  I’m guessing you have.

If so, that’s evidence that the first event doesn’t have to ruin the whole meet.

Most perfectionists are guilty of this.  You want to do everything right.  You don’t want to forget anything.  You think and think and think.  To the point where you don’t get enough sleep the night before because you’re obsessing about your swims.  Then you go out into the future with “what ifs.”  This eats up valuable energy you could be using to swim.  It also keeps you in the future, out of the present (where the magic happens).

Some of my very anxious swimmer clients have come up with strategies that include: thinking about lasagna before a race, thinking about their cat, reading a book, talking and laughing with friends, etc.

Why would that be helpful?  Don’t you need to be focused?

Like I said before, everyone is different, but if you’re an overthinker, it might be better to let your mind have a little break than to get all wound up thinking about every little thing that could go wrong.  And how messing up a race might lead to the downward spiral of your swimming career.  Which might lead to you being a complete failure.  Not getting into college.  Nobody liking you.  Never getting a good job.  And dying alone.  I know that sounds extreme, but if you take it way too seriously, it’s almost as if you’re basing your whole future on 2 laps of the pool!

If you’ve put in the time, the hours, the energy, there’s nothing more you can add by overthinking on race day.  The best swimmers are able to just show up and swim.  Let your training shine through.  Don’t second-guess.  Don’t doubt yourself.  Just show up and swim.

In order to start dropping time again, in addition to physical training, it takes a couple of key things:

To make sure you’re mentally prepared before each race, download my pre-race mental strategy planner below

Success! Now check your email to confirm your subscription and .